As with previous Humber model line-ups, the new range started with the four-cylinder Hawk, however, it now shared the same basic bodyshell as the larger six cylinders Super Snipe.

The new body had an almost American appearance with a full-width grille and substantial chrome bumpers. Inside the Super Snipe was well appointed, body styles included saloon, estate, and a “Touring Limousine” version. 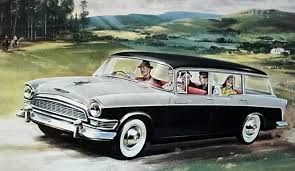 The ‘Snipe with its 2655cc Six was slightly underpowered so a revised 2965cc Super Snipe II, complete with front disc brakes, came in 1959.

Humber revealed further improvements to its ‘Snipe range in 1960 with the launch of the Super Snipe III.

The new ‘Snipe had a new four-headlamp front (the first time for a British car) and many detail improvements. Underneath the substantial bonnet sat a 2965cc six-cylinder engine which produced a top speed of around 100mph.

Once again the Super Snipe was available in four-door saloon, touring limousine and estate car versions. All types featured sumptuous wood and leather interiors and were well built.